AOD9604 is a peptide fragment (Fragment 177-191) of the C-terminus of the HGH (Human Growth Hormone) along with tyrosine added onto the N-terminal.  AOD, which stands for “Anti-Obesity Drug” is currently a research peptide which has an amino acid sequence that’s similar to the lip lytic region of the HGH (human growth hormone).  HGH studies showed evidence of potential weight loss effects, potential cartilage and muscle repair as well as possible treatment for osteoarthritis.  Research shows AOD9604 to be more effective than AOD9401 (its predecessor). 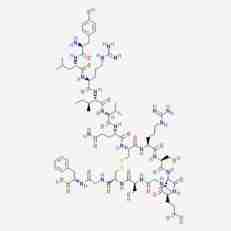 Storage: Store at or below -18°C however it’s stable at room temperature for at least 3 months

Research carried out by scientists of the Monash University, revealed that the ability to reduce fat by GH was regulated by a small region close to the end of the GH Molecule. This small region contains amino acids 177-191, making up 10 percent of the volume of the GH molecule. The region has no visible effect on growth resistance or insulin resistance. It functions by replicating how the Natural Growth Hormone regulates Fat metabolism but without the adverse effects observed with unmodified Growth Hormone.

Results from recent tests and studies show that AOD 9604 is an effective fat burner. Some functions of AOD9604 include enhancing muscle mass, increase lip contents and reducing excessive adipose tissues in the body.

In addition, AOD9604 is rich in protein, and at the same time has an effect on conformational change observed in the cytoplasmic domain of the band 3 of erythrocyte membrane protein. It achieves this by acting as a base as well as the pivot for the two subdomains.

In lab tests on fat cells, the fragment released fat from obese cells but not from the lean ones.  It also reduced fat buildup in all fat cells as well as enhanced fat burning overall. Metabolic, a pharmeceutical company,  is currently developing AOD-9604 to help treat obesity due to recent research showing AOD 9604 as a potent and very potentially effective fat burner.

The peptide’s functionality depends on its informational sequence, therefore it should have the correct configuration.   Furthermore regions of elevated accessibility to proteases and rich in proline have been shown to affect conformational changes within the cytoplasmic domain of erythrocyte membrane protein’s band 3 by serving as the pivot point between the two subdomains.